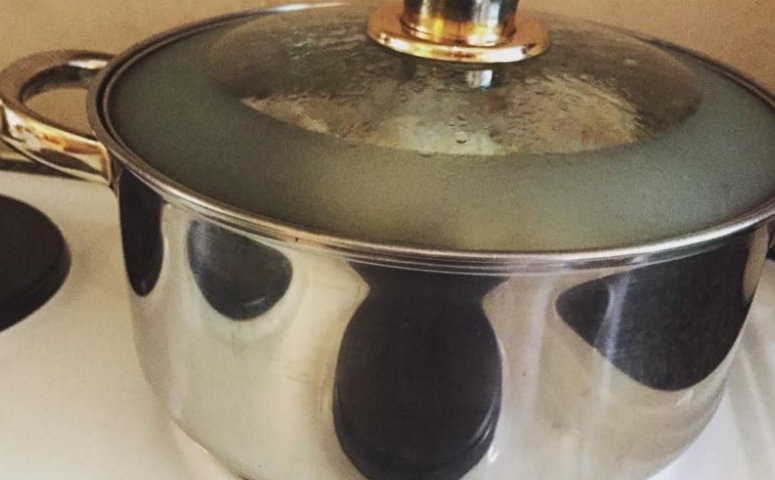 I have been loving this cooler weather – it’s such a relief to not need the fan on all day, and nursing is so much more enjoyable when those warm cuddles are sought after on a cold day. Unfortunately, I did come down with a change of season cold last week, which I promptly went on to give to Dean. Being pregnant and unable to take nice cold meds, I was feeling pretty sorry for myself. Thankfully, the cold started to go away on its own, but was fully annihilated when I managed to make chicken soup.

Chicken soup is magic, I swear. There are plenty of delicious soups out there – I adore a luxuriously creamy butternut soup and I make an amazing broccoli leek soup – but nothing quite compares to chicken soup. Whether faced with a malady of the body or the soul, this soup seems to make it all better. Maybe it’s the veggies, or simply an uptake in fluids, but there’s a reason that New Yorkers refer to it as Jewish Penicillin. I’m lucky enough to have a recipe given to me by my mom, which she got from her grandmother. Going into winter, I fully intend to have this simmering on my stove at least once a month.

I haven’t shared any recipes here before, mostly because this is a place to share my awesomely geeky parenting thoughts. However, I can’t resist for this one. You see, yesterday was a glorious Sunday. I spent the morning watching Dean playing through Assassin’s Creed Syndicate while I held Harley. Then I went out and got the Sunday paper, which Dean and I read outside, getting a nice dose of Vitamin D. He and Harley proceeded to nap for the afternoon while I put the chicken soup up and did a coconut oil treatment on my scalp. The afternoon was spent basking in a quiet house, smelling my soup and watching a trashy series on Netflix. It was divine.

So, if you have a loved one who has come down with a cold or flu, or you just need something to boost your spirits, here is my amazing chicken soup recipe. It’s not an exact science. In fact, when I received the original recipe from my mom while living abroad it included phrases such as “How many carrots? How many angels can dance on the head of a pin?” I’ve modified the recipe slightly over the years, but it still comes out basically the same, it’s truly like magic or alchemy – once you get the hang of it, you pretty much can’t go wrong.

My mom used to cut everything up before starting the soup, but I no longer do that. Instead, I pile all the ingredients into a pot – I like to peel the skin off the thighs just so the soup isn’t so fatty, but you can also skim the fat off the top if you prefer instead. So, add the thighs, peeled but whole onion, turnip, carrots, parsnips, leek, greens and a handful of salt into a large pot and top up with plenty of water (not quite to the top of your pot). Bring up to heat and allow to simmer for about an hour.

After an hour, it should be smelling nice and the chicken will be cooked through if you used raw thighs. If you used a whole carcass, you can probably reduce the cooking time.

Remove carrots, turnips and parsnips and chop into bite-sized pieces, then return to pot. Remove chicken and shred meat careful to remove small bones and cartilage and return to pot.

Your soup is pretty much done. Taste and add more salt as necessary – I tend to err on the side of too salty with this soup, otherwise it’s far too bland. Dean also adds a crack of pepper into his bowl, but he does that with pretty much all soup.

Some suggestions – you can cook and add noodles or rice to the soup to make it more hearty and filling. Growing up, we didn’t really like the chicken in the soup, so after cooking my mom would use it to make chicken salad instead; you knew you were feeling better when you were ready for chicken salad instead of soup.

Now that I’m feeling healthier, I finally feel up to doing all those things I wasn’t able to do while sick. Now excuse me while I motor through some work, I can hear the games calling me. Good thing Dean is getting Dark Souls III – I need to use the gaming rig, so we don’t need to fight over the TV and consoles. Now to just convince Harley to have conveniently timed naps.