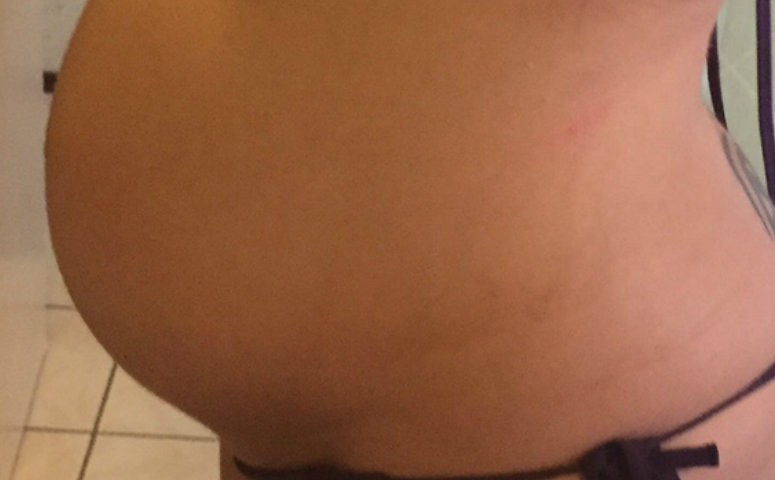 I like to think that I’m a fairly confident person. I have no problem speaking in public, meeting strangers, and I’m mostly comfy enough in my own skin to wear what I like and flaunt what I’ve got. At the same time, I’m still a woman, which means that I have my own obsessions about how I look and plenty of days when I think I’m too fat to wear anything other than certain dresses or whatever that I’m comfy in no matter what (every person needs those outfits). Being pregnant, and more specifically pregnant with a girl, has made me need to reevaluate a lot of my own body issues, and get over myself.

I have always had a round figure. I’m fortunate enough to have round “squishy bits” as my husband likes to call them (I hate when he calls them that, of course), so I tend towards an hourglass figure… although that cinched in around the middle bit isn’t generally as small as I’d like. In particular, I hate my stomach and I always have. Even at my thinnest/fittest/healthiest, I have found my stomach to be my least favorite body part. Now, though, it’s filled with a tiny human, and that makes it better, but I plan to do even better with my body image stuff.

You see, I’m convinced that every woman has body issues. Whether she thinks she’s too thin, too fat, flat chested, over developed or whatever in between, I don’t believe I’ve ever met a woman who was totally happy with her body. And these issues are learned – they have little to nothing to do with how the rest of the world sees us, but rather the body dysmorphic crap we all have to deal with. I already knew some things about raising a girl that my mom did that I want to repeat with my little munchkin – things like never commenting on her body or her weight in a way to make her uncomfortable, and definitely telling her that she’s smart, beautiful and strong or healthy. It’s not about how much you weigh, but the miracle of what our bodies can do. Of course, I feel like I have to do more than that. For at least a bunch of years of her life, I will be her biggest role model. And her biggest role model has never allowed anyone to take a picture of her in a bikini, because ew, why would I want to celebrate that. Instead, today I break all of that. Today I reclaim my body confidence because I want to be the mom who plays with her little girl in the pool, I want to be the mom who isn’t afraid to dress in matching outfits with her kid, I want to the be the mom who is the embodiment of positive body image no matter what, so that little princess Harley grows up to know that not all women need to feel bad about how they look. So, here is my pregnant bikini body – feel free to judge if you want, but I’m going to head to the pool and cool off in this Joburg heatwave.

3 Comments Parenting, Pregnancy Share
BikiniBody ImageFake it til you make it