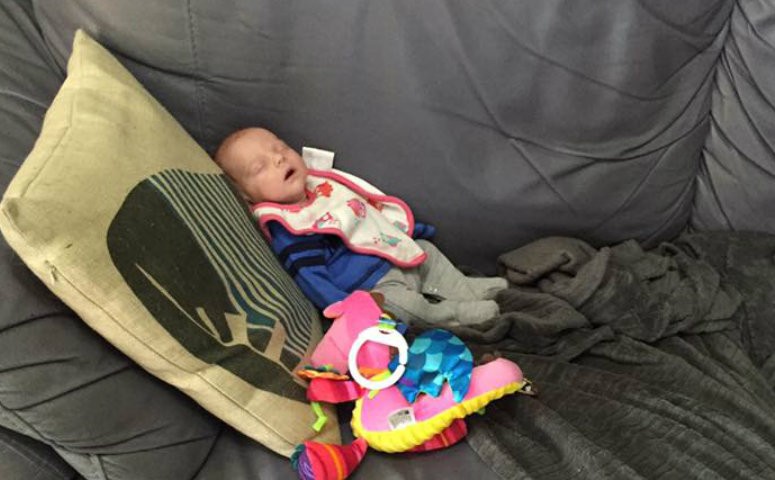 I am quite lucky with maternity leave. I have been given three months off work, and even when I return to work I will be working from home which should hopefully be manageable while still looking after Harley. I’m sure it will be tough, but hopefully by then I will know what I’m doing with her even more than I do now and can find some sort of daily rhythm that works for me, her and productivity.

Dean, however, had to take leave in order to be with me for two weeks. He had already used his “family responsibility” leave when I was in the hospital, but I really wanted him home when Harley arrived, and it made a huge difference. It’s been great having him around, but it’s also so hard to believe it – he went back to work today. His paternity leave is over, and now he is back at work and I’m alone with Harley for most of the day.

He and I had already had turns being alone with her, so this wasn’t a first. I was on my own with her in the early days when he would pop to the shops for us, and he was on his own when I went to get my nails done. I know what needs doing and how to look after her, so that’s fine, but it certainly is weird after being so used to having him around.

More than missing him (which I do, a lot), it’s hard to believe it’s already been two weeks with her. I took her for a follow up doctor’s appointment today and she is doing so well, gaining another half a kilo in the two weeks that she’s been home. She is gaining weight nicely, growing well and generally thriving. But where did the days go? They dragged in a way that only sleep deprivation can cause, with the hours slowly ticking by as she would cry or scream for unknown reasons late into the night. But now all of a sudden, she’s been home for two weeks and is already seven weeks old (or minus one week if we adjust for her due date).

On the one hand, it feels like an eternity. It seems like ages since I had a solid night’s sleep, since Dean and I could relax together, since my life was “normal”. And yet on the other hand, the time has gone so quickly and this new rhythm does feel like a new normal. I’m used to waking up in the middle of the night now, even if it’s exhausting. I’m used to planning my day around her routine of nappy changes, feeding and sleeping, fitting in doing the dishes, making food or playing games in those stretches of time when she’s chilled.

I miss Dean today. Not because I’m “stuck” with the baby on my own, but because I actually just miss having my husband around. I miss midday kisses and jokes, I miss my partner in crime. While his extra pair of hands have been a lifesaver in these first two weeks with the baby, it’s also just been wonderful being on leave together for a couple weeks. And he did things and figured out things that only a dad can, like propping her up on the couch to nap or figuring out exactly the right way to burp her. I’m glad I still have another month or so left of maternity leave, but I’m already sad that paternity leave is over.