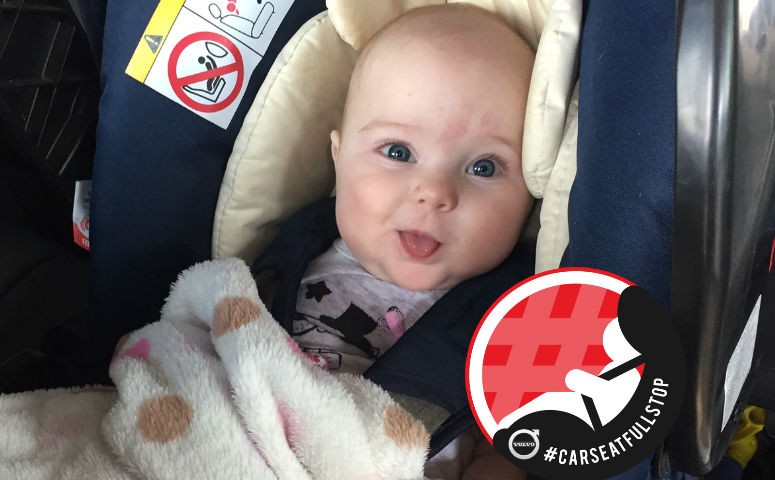 I didn’t grow up in car culture. I grew up in New York City, where public transportation and taxis and walking are the norm. As a result, I didn’t grow up around cars and car seats, instead learning about them once I moved to car-centered cities as an adult.

This is actually a good thing, though – the information about child restraints has evolved a lot in the past 20-30 years, and research continues to show the importance of rear-facing seats. Harley’s infant seat was obviously rear facing, as is the norm for all infants, but she will probably grow out of it in the coming months, which means we’ll need to buy her a new one. But she will continue to face the back of the car, and here’s why.

They will continue to harden as she grows up, but she simply doesn’t have the hard skeleton that we think of just yet. But it’s way more than that. Think about the adults you’ve known who have been in collisions, or cliche movies from the 90s – whiplash is a big deal. In a car accident, your head flies forward and then backward, with only your neck to keep things in place. As adults, it’s pretty awful, and our heads are way smaller in proportion to the rest of our bodies than our little ones. It’s part of what makes Harley so cute, her bobblehead appeal, but just check out this cool image showing the actual proportions of head to body as we grow up.

It’s no wonder tummy time is so important and effective at this age – it really is a serious upper body workout to lift that ridiculous sized head! It’s sweet and adorable, but also makes babies so very fragile. We are all just sacks of meat getting thrown around in the unfortunate event of a car accident, but children under four are even more vulnerable. It doesn’t have to be that way, though. In a head-on collision, rear-facing seats reduce injury risks by 90% compared to unrestrained kids, over 20% safer than children wearing just a seatbelt (68% lower risk of injury).

If any of you love physics-based games as much as I do, you’ll probably understand why – the force is spread over a wider area. But why believe me talking about physics games when you can watch this short and simple video that shows what I’m talking about.

So, how long am I planning on keeping Harley facing the rear? Well, considering how safe it is, I wish I could also face backward while driving! But really, once you buy a rear-facing child seat, it can last you for a long time.

People kept telling me that Harley would basically need a new car seat every year, but that’s simply not true. Most rear-facing child restraints are built for little ones ranging from 9-25 kgs (20 – 55 lbs).

That means Harley could easily stay in there until she’s four years old. Sounds like a decent investment to me. You can download some interesting brochures about this from Volvo here if you’re looking for more research and information.

I’ve been forced to become educated about car seats living in Joburg. I drive somewhere with Harley every single day – whether it’s to take Dean to work, or pick up groceries, or meet up with friends, or go to her TopTots class, we are jumping in the car a few times each day. Whether we are going one kilometer away or ten or 50, Harley is always strapped into her car seat, facing the back of the backseat. In the same way that Dean and I don’t start driving if the other isn’t buckled up, we simply don’t put Harley in the car without ensuring that she is strapped and clipped and restrained.

Harley is as safe as possible in her car seat, but there are still thousands of babies in South Africa (and around the world) who aren’t. Please help all those other babies, there IS something that you can do – share this post. Share the other posts you see with #CarseatFullstop. Follow the campaign on your favorite social networks, and keep spreading the word. Even if you always strap your kids in, with South Africa sitting at a 15% rate of kids properly restrained in cars, the likelihood is that someone in your social circle doesn’t always use a car seat, or doesn’t use one that would be effective considering the age of their little one. Please just share this post, and others like it – it might get irritating to keep seeing it in your social feeds, but it’s worth it if it raises awareness and saves a life.

Full disclosure: the good people at Volvo have come on board to sponsor #CarseatFullstop, and so I received compensation for this post. As always, though, I only accept work on campaigns I believe in. Here’s hoping that their sponsorship helps to spread the message further than would have been possible otherwise, saving the lives of our most precious cargo. #CarseatFullstop is sponsored by Volvo Cars. You can download the free Children and Cars Manual here.