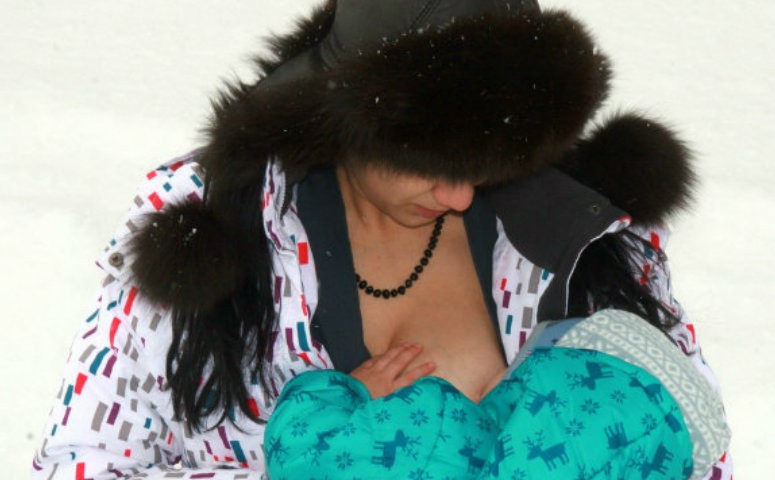 I was convinced that breastfeeding would be straight forward – a no brainer. My mom was a La Leche League leader back in the day (but not one of the crazy ones, I swear) so she would be able to give me all sorts of answers, plus I read a ton of articles and books about it before Harley arrived. If there was one thing I knew, it was breastfeeding. Well, not really. So, in honor of World Breastfeeding Week, here’re all the things I’ve learned so far.

When Harley arrived so early, she wasn’t able to nurse. Sure, I’ve seen beautiful stories since with babies nursing while in the NICU, but Harley simply couldn’t. She didn’t really have a sucking reflex, had to be fed through a tube. Just learning how to suck, swallow and breathe as a cooperative activity took weeks. I was still so proud that I was able to pump for her while she was in the hospital, that I could give her milk and feed her and help her grow. It was sort of the only thing I could do for her while she was in there, and it made me feel useful, maternal. But things changed so much along our nursing journey.

It was weird when we brought her home – it was hard to pump all the time and look after her. It was so much WORK! I had always assumed that I could just pump while doing whatever else, always having a supply of milk for when Harley needed it, even if I wasn’t around. Well, it just wasn’t so simple. Once Harley latched onto the boob, a glorious evening feed that I will never forget, she never wanted the bottle again. Nope, why have a bottle when she can be cuddled and get her milk straight from the source – just the right temperature, just the right amount from the nipple, and the opportunity to bond.

That was one of the biggest surprises for me about breastfeeding. I mean, I knew that it was meant to help babies bond with their mothers, but I had no idea how much it would help me bond with Harley. The relief of the letdown is great, but even better is that surge of hormones when she’s latched on. I just want to hold her, to snuggle her, to make her feel safe, to nurture and feed her. My favorite is when she falls asleep on the boob. I don’t know what it is about it, but it makes me feel like a good mom, like I filled her up, gave her everything she needed, let her relax. And then I get to look at that perfect little face of hers and fall even more madly in love.

Then there is the pride. I’ve had it every step along this journey, and continue to feel it. When I see Harley’s fat rolls, when I see how healthy and chubby she is, when I think about how she has never been sick, when I realize just how much she is thriving, there’s a huge amount of pride about it. That comes from me. That’s the power of my milk, of my boobs. I made those fat rolls, I give her what she needs for a healthy immune system, I have been the source of all her nutrition. I am the reason she is thriving right now, and it’s pretty thrilling. That doesn’t mean it’s been easy, though. You would think that breastfeeding would be pretty normal, right? That people would kind of accept it as a way to feed your kid? I mean, I’m totally supportive of friends who haven’t managed to nurse, or who haven’t nursed for as long as they would have liked – as long as your kid is fed, that’s all that matters in the end. But the judgement that some people have is pretty shocking. There have been those who have pushed me to stop nursing sooner rather than later. Who have told me I shouldn’t continue after six months, or after a year. The fact that I was still nursing at five months, or now at eight months, continually surprises people. Do they not realize that it’s the healthiest and cheapest and easiest option? I don’t need to carry bottles or buy formula or worry about how much Harley is consuming. Just pop her on a boob and I know she’s getting everything her growing little body needs.

Luckily, I’ve been able to nurse pretty much everywhere. Maybe it’s my “don’t mess with me” face, or maybe it’s my confidence about just whipping out a boob and nursing wherever Harley gets hungry, but I’ve never had anyone tell me that I couldn’t nurse somewhere. I’ve done it in restaurants, in shopping centers, at expos, at house parties, or even after meetings alone in corporate board rooms. In those instances, I’ve gotten nothing but support – waiters in restaurants offer me fresh drinks or to help with my food, and the business people I know happily let me use their space. I almost feel like an activist breastfeeder at times – if I see a mom looking shy or awkward about needing to nurse her little on in a mall or other public place, I will try my best to sit near her and nurse in solidarity. It feels like I’m part of a tribe, a sisterhood, and us nursing moms have to look out for each other.

Of course, back to the negative, I really miss having my boobs for myself. I miss feeling like my breasts can be sexual things – I used to love the way my boobs looked in tops or dresses, and I was always happy when Dean would show his appreciation, too. Now, I feel like they are changing forever, becoming utilitarian appendages instead of sexy accessories. They don’t look the same, and I don’t feel the same way about them, either. I hope that once Harley weans I can go back to having them play a role in intimacy, but at the moment it just feels weird – they are Harley’s boobs, not mine or Dean’s.

Along those lines, I miss having my body for myself. I gave myself a year before worrying about getting fit. A year to have a routine, to start exercising again and not eating like a ridiculous human being. That’s the thing, no one warned me that breastfeeding would make me ravenous! I am hungry all the time. And thirsty. I lost so much weight after giving birth and when I was just pumping before Harley came home. But now… I think I’m gaining it all back, with interest. I know I can lose it again once I get active, but at the moment my body is feeling like a foreign country. Not to mention the fact that there is a little person on me, every day. She needs me, all day every day!

With Harley starting solids now, and thoroughly enjoying her baby led weaning, it’s become clear that nursing won’t be forever. I mean, obviously I knew that it wouldn’t be forever, but it can feel endless when you’ve got another human being attached to you every day. But now… now the end is slowly coming into view. I’m still months away; I have no plans to wean Harley until she’s ready, eating all her food and no longer looking for the boob – whether that’s in three months or a year. But it’s surprised me that I’m sad at the idea of this breastfeeding journey ending. Those quiet moments when we stared at each other, when we fell in love with each other, when we bonded – they were beautiful and intense and helped me to forge what it means for me to be her mommy. But they are fleeting, and sooner rather than later, it will be all over. So until then, I’m going to try and overlook the bad stuff, overlook the changing boobs and body, the weird comments and judgements from people. I will love my little girl, be glad I can feed her the good stuff, and be proud of the journey we’ve been on so far.

Happy Breastfeeding Week everyone! Have you nursed a little one or plan to nurse? Why do you think it needs to be promoted? There are so many benefits to having your munchkin on the boob – I would never make any of my friends who go the formula route feel bad for doing so, but I am so eternally grateful that I’ve been able to feed Harley for so long.