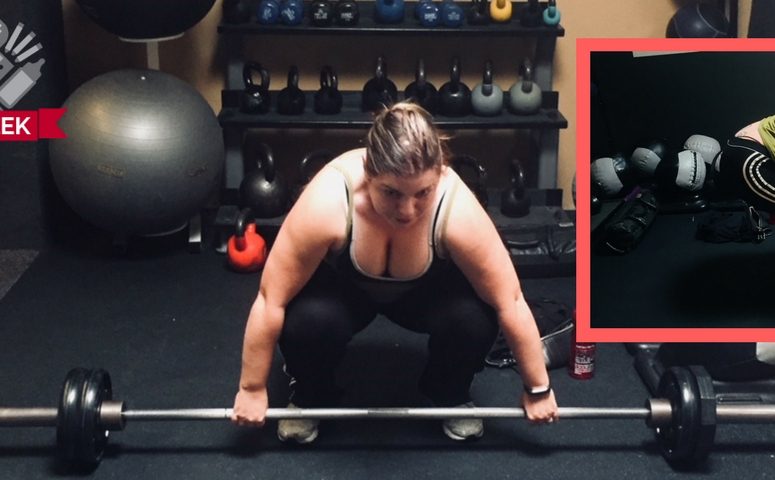 I will confess, I was already a gym slacker before I got pregnant. I wasn’t going as often as I used to and was generally looking for a change. Then I spawned a person, and at my very first doctor’s appointment, I was told that I couldn’t lift heavy weights while pregnant. It was a disappointment, but also sorta a way of letting myself off the hook.

Fast forward 2.5 years, and I’d gained quite a bit of weight and hadn’t been in a gym for years. Sure, I did yoga for a while, and I was constantly carrying around a 10kg (22lbs) human, but I was out of shape. When we moved into our new, awesome home, we joined our local gym and I returned to weightlifting at last. I’m still in the early days, but I’ve learned some important things.

I’ve lost muscle mass. Like, a lot of strength. I simply can’t do all the things I used to be able to do, especially not at the same weight or intensity. I can’t lift as heavy, I can’t run as far or as fast. That’s okay, we all need to start somewhere! Just don’t overload your barbells or push yourself too far on that first (or second) day.

But you’re probably stronger than you realize

I thought I’d pretty much be starting from scratch, but I’m not. Sure, it’s hard to see that most of my squats now are at a weight that I used to lift as a warm up when I was at my best, but I’m still able to squat over 100lbs. That’s really not too shabby! You might have lost a lot of fitness since the last time you were at the gym, but don’t write yourself off – you can probably do more than you might think.

Celebrate your small victories when returning to the gym

My deadlifts should be called ‘lightlifts‘ at this point because of how little I’m loading on the barbell. However, my form is still aces, even after years out of the gym. In general, my form is still great and the muscle memories are there – I know HOW to lift the weights and how to train my body to get strong and fit again. It’s now just a matter of implementing that knowledge rather than starting completely from scratch.

Find tools to track your progress

I always think I’d like before and after pictures, but I hate the before pictures so much that I often fail to take them. Plus, change can happen so slowly sometimes that the pictures just end up depressing. Instead, I like to use other ways to track my progress. I use a site called Fitocracy to keep track of my workouts, and they can create some cool graphs so you can see how you’re lifting more weight, getting more points for workouts and even leveling up.

I’ve told you before how much I love my FitBit Alta HR. I really don’t know how I lived without it before. I use it to track my sleep and my calories. I got mine as a gift from the iStore in South Africa, for which I’m eternally grateful. If you’re based in SA, check out their store and tell them thanks from me. If you’re based outside of South Africa, here’s an Amazon link (yes, it’s an affiliate link) so you can get one for yourself

Also, I have officially caved. For years, I ranted and raved against bathroom scales. In fact, I still have an intense hatred for scales because they only tell a small part of the story. When I started lifting weights, I dropped clothing sizes but went up on the scale. I was gaining muscle while losing fat, plus improving my bone density. If I’d just gone by the scale, I would have cried and stopped exercising, but instead, I ended up super healthy and strong. So why am I getting on a scale now?

Well, I decided to put one on my birthday wish list and Dean’s family was kind enough to buy it for me. This scale is super cool, though

! Sure, when you step on it, all you see is that awful weight number. But then you can link it to an app and see all kinds of other data like body fat percentage, bone density, water levels and more. I LOVE this scale because it lets me focus on the thing I actually want to do, which is losing fat, rather than getting stressed about how much I weigh.

I’m liking that I get to see the day to day progress while also checking a graph on the app to see overall trends. When I combine this with my FitBit and Fitocracy, I can actually see how going to the gym can make a difference… or not.

Accept where you are now and be proud

I used to love that I could squat almost 200lbs/100kgs. I was so proud of how strong my arms and shoulders were getting. I used to call myself a gym rat in the best sense and I considered myself pretty clued up on health and fitness. Now, I’m a soft-looking mom, back at the gym and trying to get fit again. My goals have changed, but also I have changed. I am proud to be back at the gym, proud to be setting an example for my kid of what it looks like to get strong, to train for a zombie apocalypse.

It’s too easy to beat yourself up when returning to the gym after a long while. We compare to where we were, get upset with where we are now and can feel defeated. But the good news is, you’re back at the gym! You’re working towards fitness again, you’re taking care of yourself again, and you are valuing yourself again. Sure, that pudgy before picture might not look as strong and trim as the fit person you’ll be in a few months’ time, but that person is strong enough to make a big change and know her own worth. So don’t put yourself down, lift yourself up.