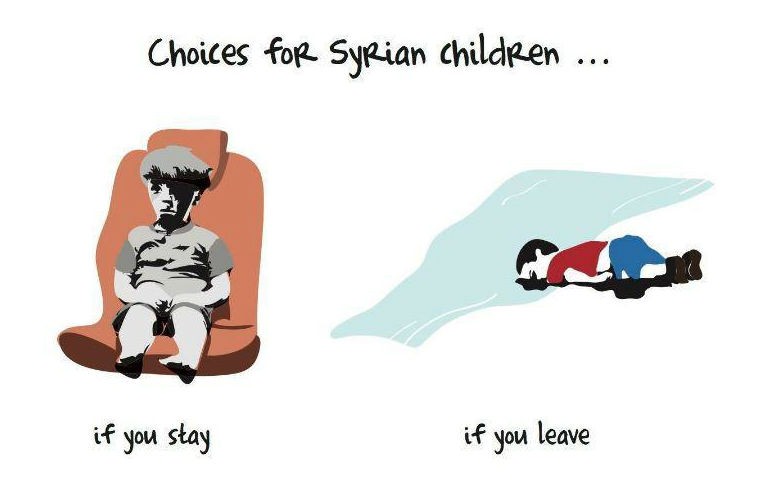 The conflict in Syria is serious business. It’s devastating, leading to thousands of deaths and displaced people. While the debate rages in Europe and America about refugees and who we do or do not want in a country, our humanity is being tested. I remember being a fairly young kid during the crisis in former Yugoslavia, and Elie Wiesel went to see the camps there, then “the latest holocaust”. He went to shed light on the plight of people anywhere in the world – whenever we stop seeing a group of people as our own, there will always be horror and death. The latest dehumanized group seems to be anyone from the Middle East, or probably better put, any muslim. Omran Daqneesh changes that.

During recent political talks with my mom, or with anyone really although she and I talk about it the most often, we are shocked at the current political situation in America. But then we look back, and can point to any period of time when even great presidents did awful things. Just look at FDR turning back a ship packed with jews during WWII, sending them back to certain death. He was an amazing president, but that was a terrible decision. A decision that Europe and America are making all over again, this time with Syrians. But this isn’t a post about politics. This is about a scared little boy who breaks my heart into tiny little pieces.

If you’ve been living under a rock, Omran Daqneesh is the name of the little boy who survived an air strike in Aleppo, Syria. He is five years old. His photo has been shared all over my social media feed, upsetting me every time I saw it. But I think you need to actually see him in motion to see why he makes me cry.

Yes, that dazed look is heart breaking. But you know what’s worse? The way he goes to wipe his eyes with the back of his hand. My baby does that. He then realizes he’s hurt, bleeding. A little five year old boy. A baby. His home is gone, he has family members who have been killed, he is covered in dust, injured, in shock. A little one, who should be kept safe and warm and never go through anything like this, has experienced real trauma. I wish I could reach through my screen and scoop him up, hold him, give him a warm bed and a promise of being safe. Maybe an exception will be made for him, maybe he and his family will be invited in by another country. But until this moment, Omran and his family have been painted with the “evil terrorist” brush, considered too dangerous to allow near us.

Omran Daqneesh is the terrible reminder the world needs. He is one of hundreds, thousands of kids who have been injured or killed. And I know, becoming a mother has made me feel these things deeper, but that could be my baby. That little boy deserves just as much love, happiness and safety as Harley does. What would any of us do if our country became a war zone? Would we risk death getting our kid to safety? Would we risk death staying where we are? It is simply devastating to think what Omran has gone through, but even more horrifying is the thought that we could have done something to keep him safe. I just hope that all the renewed outrage reignites interest in the issue, pressures our politicians around the world to take action, and makes people think differently about the refugee crisis.

How many more babies do we need to see in desperate need on our screens before we remember that we are all humans?

I was going to end my post there, but as I was adding my images and doing my usual editing, I remember a conversation with Dean so many years ago about the movie Hotel Rwanda. In it, the foreign journalists are evacuated, and the one journalist is so upset – he knows what is going to happen, they all do. He promises to share their stories, to tell the world what is happening. But he also says that people will watch, be outraged, and go back to eating their TV dinners. And I’m one of those people. I’ve known about the plight of Syrians since May 2014 when I read Neil Gaiman’s article about his visit to a refugee camp. So here is a link to a site with practical ways that you can help Syrian refugees. And here is another one. And one from the White House [Link removed by Trump White House]. Personally, I will be donating money to various organizations. I will also be trying to continue to spread the word to politicians and decision-makers around the world. If we make enough noise, people have to take action eventually, right? Please tell me we aren’t going to simply continue to eat our TV dinners. Please tell me that humanity still deserves my continuing faith.